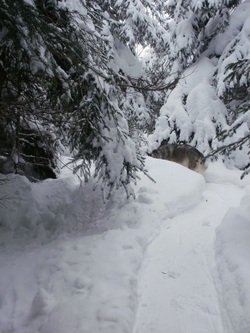 We have now sold and moved on, but this is an historical account of the work we carried out at Red Sand Cottage.

Possibly the most significant part of Red Sand Cottage for us, and that which we fell in love with immediately (even more than the proximity to the beach!) was the woodland.  We had a big list of 'essentials' on our list of attributes in looking for a property to purchase, but I clearly remember walking through the woods and thinking that none of it mattered as long as we could live here in these woods.


What a joy and a privilege it is to be able to spend time in the woods throughout the seasons, yet with that comes a responsibility to care for and protect these woods that we love so much.  We had started learning about the Acadian Forest some years ago when we first came to the island, and were sad to learn that, in common with so many places, all was not well with the forest.

The Acadian Forest - an Endangered Forest

The Acadian Forest   Red Sand Cottage is situated in the Acadian Forest area in the Atlantic Maritime Ecozone.    The Acadian Forest stretches from Northern New England and includes Nova Scotia, Prince Edward Island, New Brunswick and areas of Southern Quebec.   It is a transitional mixed forest zone between the deciduous trees in the south and coniferous trees of the north.  Our climate has cold winters but warm summers and this enables the mix of species to flourish.   In the natural Acadian forest, most of the tree species grow up under the canopy of older trees as they are fairly shade-tolerant.  Young trees take advantage of small gaps in the canopy that open up when older and larger individual or small groups of trees die, or blow down. This causes the many layers of trees of the Acadian forest – with seedlings, saplings, mature trees and dead wood all existing in the same stand. All of these trees play an important role in keeping our Acadian forest healthy.  More about the Acadian Forest on Prince Edward Island

Unfortunately the Acadian forest has been listed as one of six endangered forests in North America for various reasons including clearcutting, plantations & use of herbicides.  Peter Salonius outlines the main problems in his report Silvicultural Discipline to Maintain Acadian Forest Resilience, e.g. problems of clearcutting:

Our Woodlands Now - and our Plans 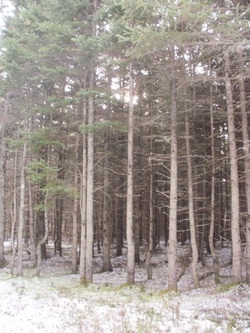 Here is an example of 'old field spruce' from our woodlands here at Red Sand Cottage in an area towards the very back of the property.  The white spruce here are growing very close together and would have benefitted from thinning, although it's too late for the ones in the picture.

So we have a stand here of all similar age and height and have sprung up naturally from old farm land.  In some areas there is little species diversity and they are in competition so grow tall and spindly and the canopy blocks out any light to the understory, where there is  virtually no understory vegetation.

This type of forest growth is fairly typical on the island, where abandoned farmland regenerates with early successional Acadian forest species and bears more resemblance to the Boreal Forests of the north than to the original Acadian forest.

For some time we've been reading the advice about forest restoration from the Macphail Woods Ecological Forestry Project.  They describe the current state of the Island's forests:

"According to the State of the Island's Forests report in 2002, only 9,000 hectares of this hardwood dominant shade tolerant forest remains in scattered patches throughout the island. By 1900, the population of PEI had drastically increased to 100,000 and only about 30% of the land was left in forests. During those 100 years, much of the best forested land went under the axe or was burned to make room for agriculture. Many species of mammals were extripated from the island forests, such as bears, fish, marten and piliated woodpeckers. Of those remaining forests, many had been disturbed by cuttings, fires, and cattle grazing. Another big problem was the introduction of diseases that has devastated the American Beech and American Elm on PEI as well as other areas.  Within the woodlot of the Macphail Woods in Orwell, PEI, there is a small area by the Orwell River that contains elements of what once was the Acadian Forest on PEI. You can still see the towering White Pines that Bald eagles currently use for nesting. Yellow birch that rise for meters tower over the stream. Eastern hemlocks along the south slope of the stream are over 2 meters around in circumference. Owls can be seen perching and Flying squirrels are found here."

This suggests that only 2% of the island which was once entirely covered with trees, remains as Acadian Forest.  There have been many calls for Acadian Forest Restoration and, since we have found ourselves being fortunate to live in the forest, we are committed to playing our small part by being good forest stewards and attempt to facilitate the regeneration of the 20-odd acres of woodland currently in our care.

There are generally acknowledged to be 32 tree species in the Acadian Forest.   Sugar maple, ash, cedar and yellow birch can reach ages of over 200 years. Red spruce and white pine can grow to be 400 years old.  Eastern hemlock is our oldest living species, sometimes living to the age of 800 years.  Also Red Oak (the provincial tree of PEI), Beech , Black Spruce, Larch, Red Maple, White Spruce, Elm, White Ash, White and Grey Birch and Eastern White Cedar are common.

Here at Red Sand Cottage, we will adopt an approach of Integrated Resource Management (IRM), where the many benefits from the forest will be renwable for future generations:
We are part of the Provincial Forest Enhancement Program (FEP) and under that scheme we have employed a consultant to carry out a survey of the woodlands and to prepare a Forest Management plan with a recommended set of remedial works to enhance the woodlot.   The full plan will be copied here at some point, but the key features are: 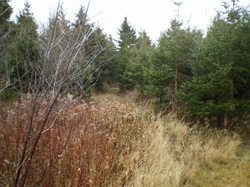 Coppicing is the cutting down of (mainly) hardwoods and allowing regeneration of growth from the stump for various uses.  We have started coppicing several stands of alder for fence posts, poplar for future firewood and willow for craft materials.  All will be on a short, 3-5 year rotation coppice.

We would love to interplant the poplar with sweet chestnut as maidens to grow on as standards in the coppice as coppicing with standards protects regenerating coppice and doesn't take too much light away from the coppice if no greater than 40% of the canopy space.    Although the calorific value of poplar is low, the speed of growth is so high that this more than compensates and coppiced poplar could produce 2 cords per acre per year.  If this proves to be the case here, we would need less than 1 acre of coppice to meet our needs for cooking, heating and hot water, supplemented with thinnings, prunings and clearing to produce a more diverse fuel mix.

We are coppicing mainly hardwoods, but experimenting a little with the coppicing of softwoods.   By coppicing we would encourage biodiversity by the creation of new habitats, prolong the life of the trees and create a sustainable source of future craft materials, posts or firewood.   After initial cutting, there is no need to thin the large number of shoots per stool as self-thinning takes place over the following years (except for softwoods which do need a little thinning).

Generally there is a larger number of shoots in the first year. Growth is fastest in the second year and tails off by the third.   Coppice is cut during the winter to ensure that shoots are frost hardy and to avoid disturbing foliage during spring nesting or trampling plants underfoot.  Branches and logs cut during the winter last longer than that cut when the sap is higher.

'Rides' are roadways through the woodlands, open access areas where there is sufficient gap in the canopy to allow light to reach the ground.  If these are in an East West direction it minimises any wind tunnel effects, but these effects can also be minimised by having meandering rides with narrow ends and by cutting 'scallops' into the sides.   We have an existing North/South 'ride'.  In order to mitigate some of the wind effects that this might cause we have added 'scallops' into the side of the ride to create warmer wildlife areas out of the wind.  Another strategy might be to narrow down the openings at the two ends of the ride 20m from the woodland edge.   Within the scallop, insects, small mammals and birds can feed, shelter and thrive in the warmer environment where dog-roses and native shrubs like dogwood thrive.  This is a benefit to us providing rose hips and dogwood craft stems.

A major benefit of the scallops (and the patch cuts) is that they allow blueberries to grow.   It is our aim to leave or create 'pinch points'  (where the tree canopy touches across the ride or is no more than 1.5m apart) at approximately every 100m along the ride for mammals like squirrels that do not always like to travel over the ground over open spaces.   Thinning the woodland either side of the ride gives greater benefit, a graduated edge is the optimum for maximum wildlife diversity.

Glades can be created where rides cross (box junction). The edge of the glade can be wavy to increase edge and allow shrubs to grow.   Dead wood is a crucial habitat - high up (standing snags) for nesting sites (woodpeckers, bats, birds), brush piles for shelter, fallen trees for insects lichens fungi and mosses (and the species which feed on them).

On the Northern side of the woodlands, we are grading the edge with shrubs leading to smaller trees and then larger trees to help slow the progress of the damaging northerly winds, thus avoiding tree damage. This also helps to warm up the wind, protecting wildlife.   Rabbits in small numbers help if they create bare patches of earth where snakes and lizards can thrive.  However, in larger numbers they damage the flora of the rides and eat shoots of regenerating coppice. 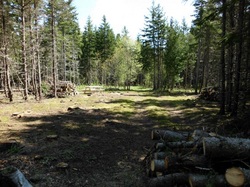 Part of our Forest Management Plan is to carry out small patch cuts in the white spruce 'monoculture' in order to enhance biodiversity.  This is a picnic glade we've cleared, one picnic table is in place, another to follow (no easy task!).  Already new species are springing up and looking strong and healthy: balsam fir, mountain ash, eastern cedar and white birch are appearing where once there was only the one species (white spruce).

If we had left well alone for nature to take it's course, the spruce were of an age where they would start to fall in about 4-5 years time.  When light hit the forest floor, new seedlings would appear (just like we are encouraging here), but they could easily be crowded out by spruce seedlings.  This is what happened originally when this farmland was left to regenerate.  In other, newer areas of the woods, we can see this happening.  At first there are a number of different seedlings, but the older the woodland, the more these get crowded out by the spruce. 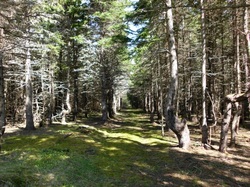 The above picture shows a section of the woodland walk.  Here you can see clearly how only the tops of the spruces are green, everything else appears dead and there is no vegetation on the woodland floor.  The spruce are too close together, but it's too late at this stage to thin them, the best course of action being the patch cuts advised by the forestry consultant.